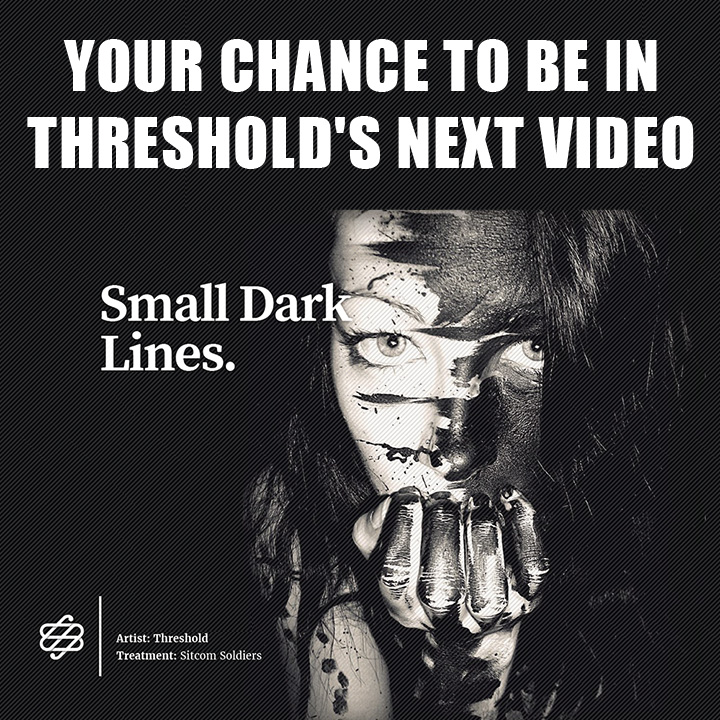 Threshold are shooting a video for their forthcoming single “Small Dark Lines” and you could be in it! The video will be directed by Sitcom Soldiers at their studios in Bolton, England on Friday 28th July.

The film directors have developed a powerful narrative, involving people from varying backgrounds marking their bodies with paint before water cascades over them to wash away the lines as if wiping the slate clean. So if you want to take part we should warn you that you’ll be asked to expose most of your skin. However, we’ve been assured that it’s all being done in the best possible taste. The aesthetics of the video will be heavily stylised and moody, with a large amount of slow motion and cinematic tone.

To apply for the video please ensure you’re available in the day on July 28th and able to travel to Sitcom Soldiers’ studios in Bolton. We’re looking for a range of people from all walks of life. Please send a photo, phone number, name, age, where you’ll be travelling from and any details of acting experience or reasons why you’re perfect for the role to: casting@sitcomsoldiers.com

We have a limited number of spaces so please apply quickly.  Thank you! 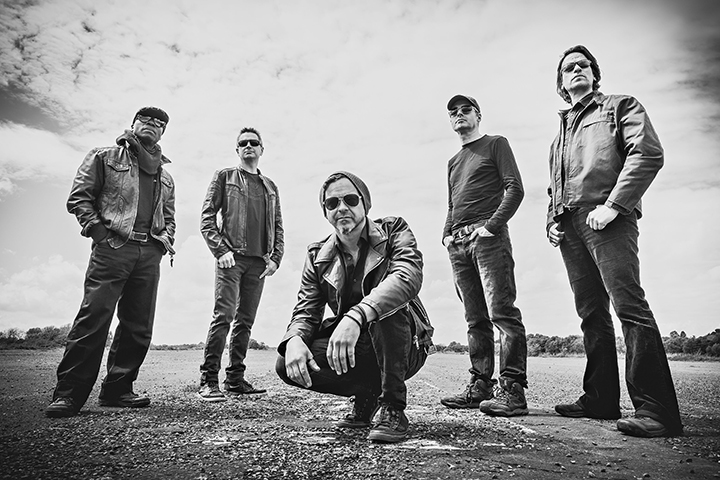 The band are currently at Thin Ice Studios in England putting the finishing touches on their new concept album “Legends Of The Shires”. The record is due for release through Nuclear Blast later this year and it will be the band’s first ever double album.

Karl Groom commented: “The music just would not stop flowing during the writing process. We decided that while the ideas were of a high standard, we would keep writing and are very excited by what we have.”

THRESHOLD will be back on the road across Europe at the end of the year, kicking off in Athens on November 12th and rounding off with a homecoming show in London on December 10th. Glynn Morgan will also play guitar during the shows, which will include tracks from “Legends Of The Shires” as well as plenty of blasts from the past! 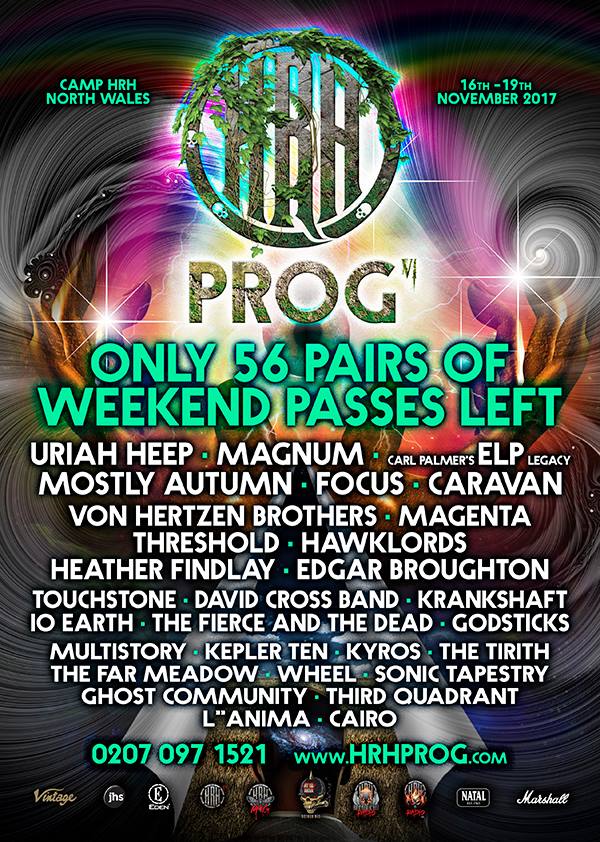 Threshold are very pleased to announce they’ll be performing at HRH Prog VI in North Wales on 17 November 2017. Other bands on the bill at the four day event include Uriah Heep, Magnum, Calmer Palmer’s ELP Legacy, Mostly Autumn, Focus, Caravan and many more.

Threshold have added another date to their Legends Of The Shires 2017 tour. The band will kick off the tour at Kyttaro Live Club in Athens, Greece on 12 November 2017. 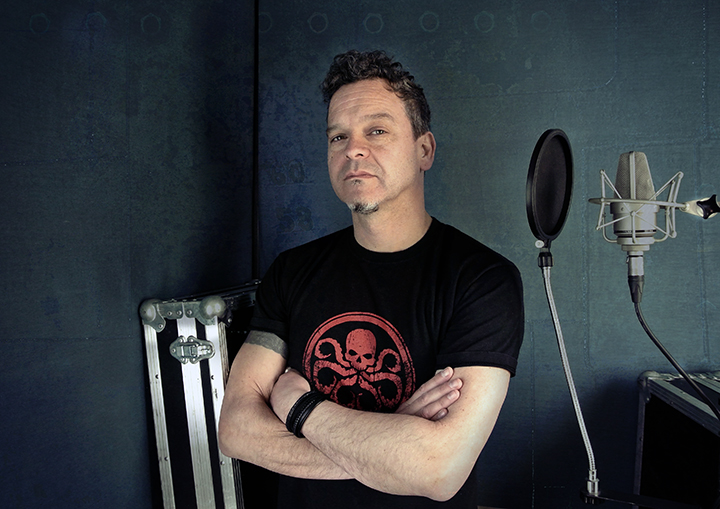 British progressive protagonists THRESHOLD recently announced their 11th masterpiece “Legends Of The Shires”, scheduled to be released in autumn 2017, which is being produced by Karl Groom and Richard West. Furthermore, they have also announced the dates for the “Legends Of The Shires” – Tour 2017 where you’ll be able to fully experience songs from the new album on stage.

Today, the band reveals the support acts for this tour: Get ready for DAMNATION ANGELS and DAY SIX!

Richard West comments: “We’ve got two excellent bands joining us for the tour. We met DAY SIX when they supported us for a few shows back in 2011 and we’re very happy to have them back for a whole tour. DAMNATION ANGELS were a crowd favourite when they opened for us last year, so it’s great to have them back as main support for 2017.”

British symphonic metal act DAMNATION ANGELS was formed in 2006 and their most recent record “The Valiant Fire” (2014) marked their second studio album.

They comment: “We’re excited and ready for round two with our good friends THRESHOLD! The last tour was incredible, the fans were amazing and we can’t wait to return. This time playing a longer, more diverse set of our brand of symphonic metal. Let’s be ‘avin it!”

Dutch progressive rock band DAY SIX released their album “The Grand Design” in 2010 and is ready to properly present a new album on this upcoming tour.

The band states: “This is one of those rare moments in live where things just fit seamlessly: while we are scheduling studio recordings for our new album, THRESHOLD was looking for an opening act for their European tour. When? Exactly when we planned to have the new DAY SIX record finished! We are more than happy to go on tour with THRESHOLD and to be opening the shows for these wonderful guys and amazing musicians!”

“Legends Of The Shires” – Tour 2017
(presented by Rock Hard, Eclipsed, Rock It!, Blast! and Wacken Radio) 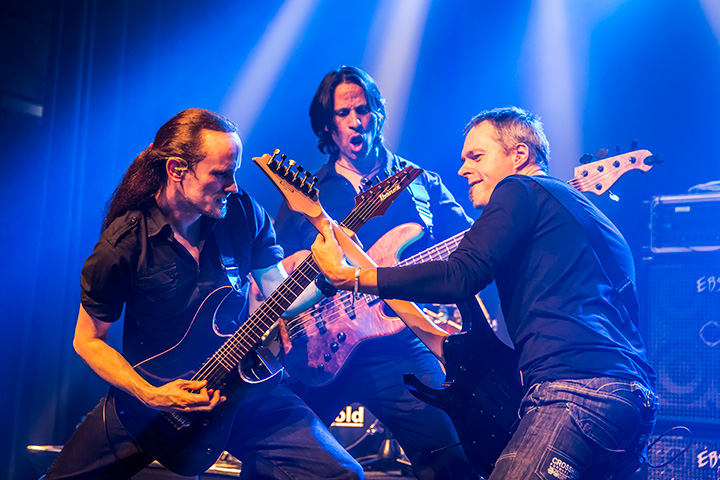 Threshold are currently recording their 11th album at Thin Ice Studios in England, a new concept album that will be called LEGENDS OF THE SHIRES. It’s being produced by Karl Groom and Richard West and is scheduled to be released in 2017. More information will be revealed soon.

The band has also announced dates for the Legends Of The Shires Tour 2017 where you’ll be able to fully experience songs from the new album on stage.

Richard West comments: “It’s great to be announcing these tour dates so soon, we can’t wait to get on the road and perform for you. Our new album is coming together perfectly, we’ve got a lot of strong material so it might be our longest one yet.” 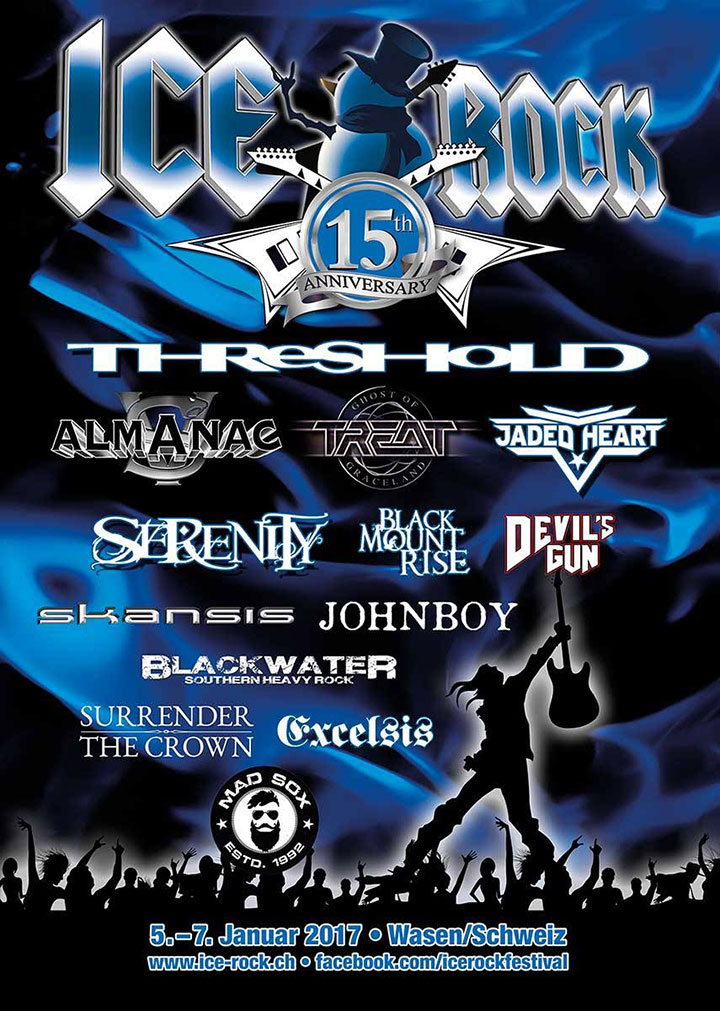 Threshold will kick off 2017 in style, headlining the 15th anniversary edition of Ice Rock Festival in Wasen, Switzerland on 7 January.

Other bands on the bill include Almanac, Treat, Jaded Heart and Serenity. For more information see the festival website at www.ice-rock.ch 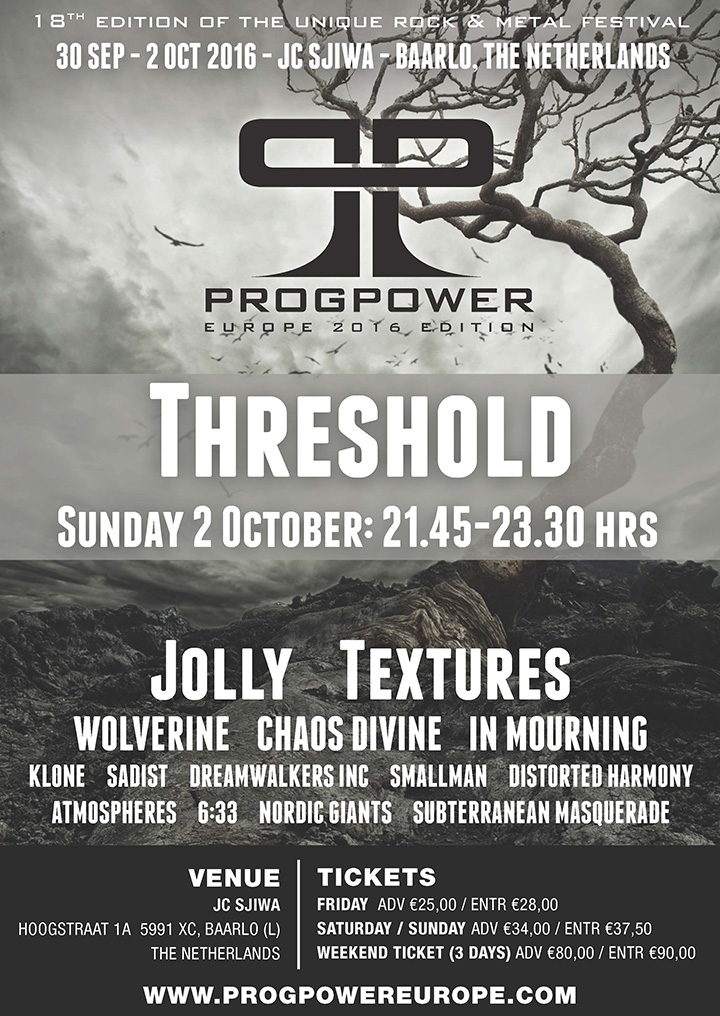 Threshold will return to ProgPower Europe in The Netherlands next week. The band headlined the first ever ProgPower festival back in 1999 and will do so once again as they visit for the fourth time on 2 October 2016.

Other bands on the bill include Textures, Jolly, Wolverine and Chaos Divine. For more information see the festival website at www.progpowereurope.com